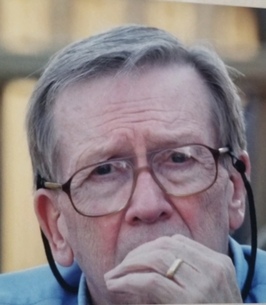 Memorial Candles Lit for Richard | SEE ALL
Light a Candle
"We are honored to provide this Book of Memories to the family."
— Barnhart Funeral Home
Funeral Details Memory Wall Photos & Videos Send Flowers

Print
Dr. Richard D. Wissolik, 82, of Greensburg, died Wednesday, December 9, 2020. He was born May 7, 1938, in Etna, son of the late Frederick “Fritz” and Barbara Saginaw Wissolik. Prior to retirement, Dr. Wissolik was a professor of English Literature at St. Vincent College, Latrobe. He was the author of a number of books. The son of a WWI veteran and father of an Army Engineer Veteran, Dr. Wissolik built relationships with many area veterans through his books and classes. Sir Richard was Knighted by the English as a result of a discovery that he made on the Bayeux Tapestry, while completing his Doctorate. He is survived by his wife, Barbara Redilla Wissolik; a son, Damien (Elaine) Wissolik, of Gibsonia; a daughter, Erica Wissolik, of Washington, DC; three step-daughters: Tracey (Scott) Dowler, of Latrobe, Chrissy Scott, of Greensburg, and Kelly Scott, of Murrysville; and numerous grandchildren and great grandchildren. Family and friends will be received from 11 a.m. to 2 p.m. Saturday at BARNHART FUNERAL HOME, 505 E. Pittsburgh St., Greensburg. A memorial service will be held at 2 p.m. Saturday in the funeral home. In lieu of flowers, memorial donations may be made to the Richard D. Wissolik Scholarship fund, St. Vincent College, Office of Institutional Advancement, 300 Fraser Purchase Road, Latrobe, PA 15650. For online condolences, visit BarnhartFuneralHome.com.

We encourage you to share any memorable photos or stories about Richard. All tributes placed on and purchased through this memorial website will remain on in perpetuity for future generations.

Patrice DiPietro, - Rawa, Samra, Al, Ben and the late Dr. Mamdouh El, and others sent flowers to the family of Richard D. Wissolik.
Send Flowers
CD
I was sad when I just happened to run across this obit online today. I met Mr. Wissolik when I took the photography class at Seton Hill and then sang with him in Camerata during the 1972-73 season. He was one of a kind and I will always remember him. My condolences to his family.

Chris Dziedzina
Cleveland
Christine Dziedzina - Tuesday January 19, 2021 via Condolence Message
Share This:
EF
A very dear friend. Our thoughts and prayers with his family.
El Fox - Sunday December 13, 2020 via Condolence Message
Share This:
MG
Richard and I traveled back and forth to Duquesne University in the early 70s. We were both late in completing our doctorates and spent hours in conversation on the drives back and forth to Pittsburgh. I was in on the discovery he made about the Bayeux Tapestry and heard about the details of the message sewn into it as he deciphered it. After I moved on from St Vincent to New York, we continued to discuss literature, philosophy and the events of the day. Through the years following, we exchanged excerpts from great singers in performance. I had promised a visit this past year to Greensburg, but events got in the way that we are all too familiar with. I will miss the fun and sharp wit of my friend!
Miles Groth
Emeritus Professor of Psychology
Wagner College
New York
Miles Groth - Saturday December 12, 2020 via Condolence Message
Share This:
GL
Dick Wissolik is among my oldest friends at Saint Vincent. He is among that group that includes Jim Meny, Ron Tranquilla, Denny Quinn, Chuck Manoli. I use the present tense purposefully. While Dick, Jim, Chuck and Denny are no longer living, they are still my friends, and still important parts of my life, as are so many others who are too numerous to list. Dick was one of those who more than 30 years ago gave me a view into what it was to be a Saint Vincent Faculty member. In his life and work Dick exemplified his devotion to students. One has only to look at the remembrances in this space written by generations who were fortunate enough to be in his classroom. They experienced his vitality, passion and care directly. And this was not just for the “academic” subject at hand, but what this would mean in the lives of his students. When he came to class he came to give fully of himself, trusting that this would matter to his students. He was right, and thousands of lives were changed by his devotion. Well done, Dick!

B1
Dick Wissolik was truly a great educator. My time with him in the classroom was invaluable. He was gruff, demanding, and compassionate. I spent many a night working photography at Seton Hill with him. I still have 2 of his photographs hanging on our walls, photos we worked into the level of art. I would only connect with him on occasion during the following years but it was revitalizing. Stepping back from this event in his timeline and mine as well, thanks for all the interest....Cammerata, photography, medievel history, and friendship.
Bill Palko class of 1972 - Saturday December 12, 2020 via Condolence Message
Share This:
JA
Dick was a good friend and colleague . I always appreciated our impromptu conversations . Our discussions in the cafeteria were so meaningful His kind invitation to speak to his veterans gathering were appreciated and meant so much. May Dick's memory be a blessing to all of you his family as it is for all of us privileged to have known him.

John Aupperle
Theology Department
John Aupperle - Friday December 11, 2020 via Condolence Message
Share This:
TC
I could write a tome on how much Dr. Wissolik means to me. I’ll try to keep it a little shorter than that (though that was not indicative of his essay requirements: single-spaced, 10-point font, front and back of all!).

Dr. Wissolik is not just one of my favorite educators of all time, he is and always will be my absolute favorite and most influential. He has impacted countless people, and there are so many tributes here and in other places that indicate just how many people he took under his wing in his career. For some reason, he allowed me to be one of those people. I took up smoking cigarettes just so I had an excuse to hang out with him after class, puffing like chimneys outside Prep Hall and talking about so many worthy and less worthy topics. He gave me an open invitation to join him for the “Umbraculum” sessions that included other students and professors, like another favorite of mine, Mr. David Safin. He respected my opinion but wasn’t afraid to give me a hard time (almost always deserved) in concert with my spiritual mentor at SVC, Fr. Tom Hart, O.S.B. Wissolik’s classes were never boring and I couldn’t get enough of his stories in and out of the classroom about Africa, Bob Dylan, the Bayeux Tapestry, veterans he interviewed and became friends with, the past hijinks of Saint Vincent English and Theater Departments, and so many other topics; in his most poignant moments, he was unabashed about how proud he was of his children and his family.

Dr. Wissolik is absolutely the most interesting person I’ve ever had the pleasure of knowing. He somehow exuded a devil-may-care nonchalance, having no issue with poking holes in the absurdity of the establishment, while also working tirelessly to gain as much knowledge as he could about art, culture, history, literature, philosophy, religion, society, theater, and the human condition, sharing that knowledge with anyone who would listen. He was a real life Indiana Jones, an adventuring, swashbuckling, larger-than-life, gruff-armored, soft-hearted, inappropriate, impassioned, analytical, receptive, faith-filled, hilarious, prolific, curmudgeonly grateful man. He sowed seeds of change in my worldview, always toward critical thinking, open-mindedness, and social justice. I took all his classes that I could, gaining an English Minor in the process. His signature course, Faces of Battle, was such a gift to experience. I’ll never forget how powerful it was to learn from veterans and survivors, themselves, meanwhile seeing how naturally Dr. Wissolik fit in with those esteemed people and garnered their respect. He was a major inspiration to me to become an educator, myself, though I won’t ever reach his level of proficiency. His classroom was where my friendship with my now wife really blossomed (and more than once he had to call us out for flirting in the middle of his lecture, which I of course thought was fantastic because it gave validity to my hope that Tessa was interested in me). And despite his legendary stature and connection to so many more compelling people than myself, he always had time for me, from when I was an undergrad student until he died. I severely regret not reaching out to him more. I love him very much and send my deepest sympathies and prayers to Mrs. Wissolik, Damien, Erica, Tracey, Chrissy, Kelly, and all his family. There will never be another like Sir Richard Wissolik. I’m so grateful I got to know him. -Tim McKenzie, C'08

Tim McKenzie, C'08 - Friday December 11, 2020 via Condolence Message
Share This:
DW
Needless to say, this is a tough one to process. I have been in a fog since I learned of his passing. He was more than a teacher and a mentor. I have the great fortune to have had him as a friend, and perhaps my best friend. I will miss him always but will hold on to the memories and all he taught me.
David Wilmes - Friday December 11, 2020 via Condolence Message
Share This:

Wishing you all peace and comfort as you grieve. Sincerely, The DiPietro Family
Patrice DiPietro - Friday December 11, 2020 via Heartfelt Sympathies | Order flowers in memory of Richard
Share This:
JC
He was an amazing man, and the only person I've ever met who deserved to have been knighted.

As I transcribed oral histories in his office, I received welcome advice on everything from how to run the A/C while blasting the heat to keep car windows clear in winter to how to appreciate a good piece of classical music ("Stop typing and listen to this part, would you?"). His classrooms and office sometimes appeared to be chaotic, except to those of us who picked up on their underlying rhythm. Learning to maintain a similar rhythm of my own got me through multiple degrees and personal scenarios after SVC. I'm very grateful to have been able to meet and learn from this human being.

Dr. Wissolik, I owe you about $25 for oatmeal raisin cookies I charged to your tab at The Shack, when you asked me to go get you coffee so you could smoke in the office. I know they told you that and you paid the tab with a smile over 25 years ago. Will make a donation to benefit current students in your honor.

Thank you, and peace to you and your family, who will see you again in God's time.